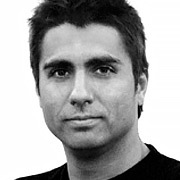 Aristomenis (Meni) Tsirbas has been directing for film and TV for over ten years and has fifteen years experience as a visual effects supervisor and digital artist. His professional career started in 1996, working as a digital artist on James Cameron's Titanic and national advertising spots for Nike, 7UP and Coca-Cola. As a visual effects supervisor Meni worked on Miramax's A Wrinkle in Time, Disney's My Favorite Martian and Paramount's Star Trek: Deep Space Nine. Between 2000 and 2003 Tsirbas wrote and directed a string of highly successful animated short films including SIGGRAPH's Ray Tracey in Full Tilt, Microsoft's Mech Warrior: Vengeance, Terra, and the acclaimed The Freak. In 2004 Tsirbas worked on two back-to-back music videos, including Tears For Fears' Closest Thing To Heaven, before setting off to direct his first feature film, Battle for Terra.