In this workshop, Neville Page shares his creative development process, starting with a script and ending with a resolved design and presentation. Neville discusses philosophies regarding creature design and techniques that allow for new ways of seeing. Beginning with 2D approaches, he explores how to use Photobooth to mirror various objects that can be further developed in Photoshop, which allow him to arrive at unique design solutions. That methodology is then further explored using his own 2D sketches which allow for designs that, while spontaneous, follow his predetermined form language. With a 2D design in place, Neville then develops this into a fully realized and rendered 3D design using ZBrush for modeling and detailing, Keyshot for rendering, and Photoshop for the final paintover and presentation. For those interested in learning how one of the industry's leading artists approaches design using the latest tools and techniques, this workshop provides invaluable insights for how to think about solving design problems while working efficiently for the quick turnaround times often expected of a designer in the film industry. 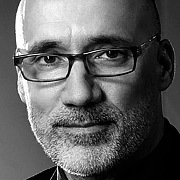 Neville Page was educated at the Art Center College of Design in Pasadena, California. Although his major was product design, he has always gravitated towards entertainment. With the combination of his education and personal interests, Neville has found himself involved with quite a variety of projects from creature design and sculpture to conceptual design and engineering. His clients have included Universal Studios, Warner Bros., 20th Century Fox, Mattel and BMW to name just a few. He has worked on such feature films as Minority Report, Planet of the Apes, X-Men 2 & 3, The Lion, The Witch and The Wardrobe, Superman Returns, James Cameron's Avatar, J.J. Abrams' Cloverfield, Zack Snyder's The Watchmen, Louis Leterrier's The Hulk, and J.J. Abrams' Star Trek. Neville has also taught at the Art Center College of design (Pasadena and Switzerland), Otis College, Gnomon and corporate workshops.