“The Fly” Re-Imagined with Eric Ryan

Eric takes you through the entire design process of creating a character, from the conception of an idea and how to make it original, to the fully-realized, final color image. Starting with a series of clean thumbnail sketches, he shows how to create coherent designs while thoughtfully infusing story elements from the character's background. The topics addressed cover many aspects of character design, including digital painting techniques, color theory, storytelling, character hybridization and tips for portfolio preparation. 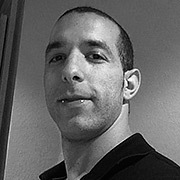 Eric Ryan is a concept artist with nine years of experience in the film, television and video game industries.  He attended the University of Berkeley with a degree in Molecular and Cell Biology, but made a career move and enrolled at the Art Institute of California. Two years later, Eric started working as a generalist for a small studio in Pasadena and has since worked for studios such as Sony Pictures Animation, Cinovation Studios and Sony Santa Monica, SCEA.  Eric has been an instructor of Character Design at the Gnomon School of Visual Effects, Los Angeles Academy of Figurative Art and Red Engine Studios.  His work can be seen in 'Men in Black 3', 'God of War: Ascension' and various other game titles.